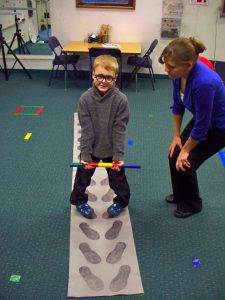 What Are Primitive Reflexes?

Many people who have cared for an infant are familiar with primitive reflexes: Turn an infant’s head to one side and the arm and leg on that side turns in the same direction (Asymmetric Tonic Neck Reflex). Stroke an infant’s low back on one side and their side muscles instantly contract (Spinal Galant Reflex). Surprised by a sound, the infant instantly spreads their hands wide, throws their head back, and opens their eyes widely (Moro Reflex). Doctors often gauge the development of the child by the orderly progression of these reflexes.

Under optimal circumstances all reflexes “initiate” during the appropriate stage of the child’s development, “integrate” themselves as a fully functioning reflex, and then “inhibit” or fall away when it’s time to move on to the next developmental stage. It is vital that this occurs.  If various reflexes fail to initiate, integrate and inhibit, the system is locked into a developmental holding pattern that prevents natural maturation of neural systems, inevitably leading to mild through severe learning and performance challenges.

For children, these challenges show up clearly in the classroom, where it is hard for them to keep up with grade level expectations for academics and behavior. Those children most able to cope develop techniques for compensation.  They just get by or succeed with great effort. Those children who are least able to cope often end up in specialized classrooms or alternative schools. They are at high risk for behavior and attitude problems, most often due to years of sheer frustration.

As a person ages, the energy to continue these automatic compensations becomes less and less available and the reflexes themselves begin to reappear in reverse order. As this happens, abilities fade and frustration emerges because of the tremendous effort required to do familiar tasks.

Why Test for Primitive Reflexes in a Behavioral Optometric Examination?

Because the symptoms of retained primitive reflexes are so similar to the symptoms of a learning-related visual problem, it is very important that we test for them as well.  If any primitive reflexes are present or retained they can limit the amount of improvement that is gained from a vision therapy program unless certain modifications are made to its implementation.

Symptoms of the Primitive Reflexes that relate to Behavioral Optometry

I brought my mom in last week for a eye exam after having had cataract surgery.. everyone in the office was so very kind And my mom got the best care! Thank you!
5 days ago
- Gina R.
I highly recommend Coleman Vision. The Doctors and staff were very professional and knowledgeable. I was very pleased with the exam and the how they answered all my questions
6 days ago
- Robert B.
Got me in early. From the doctor to the staff it was a pleasant Experience. Very professional. I'll be back.
2 months ago
- Gary C.
Dr. Coleman is very knowledgeable and easy to talk with. The gals at the front desk were lovely and Katie helped me pick out the perfect glasses. Overall it was a very pleasant experience, would definitely recommend!
2 months ago
- Kenna B.
My first visit was today. I am very pleased with the friendly and helpful staff. Will definitely return and recommend!
2 months ago
- Michael C.
The entire staff was incredible friendly and thorough. Loved my experience!
2 months ago
- Hanna M.
Very professional and courteous
3 months ago
- Robert G.